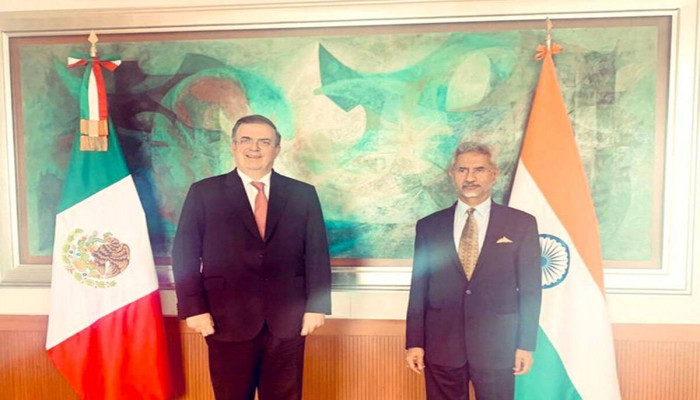 Union Minister of External Affairs Dr S Jaishankar, is on official two-day visit to Mexico to hold discussions regarding bilateral cooperation in trade, investment, COVID-19 pandemic and other sectors. This is the first visit of EAM Jaishankar as an External affair minister in Mexico.

During the visit, he paid his homage to Mahatma Gandhi on the occasion of the anniversary of Mexican independence.

Earlier, he visited the Grandeur of Mexico exhibition. After which he shared some pictures on twitter with First Lady Beatriz Gutierrez Muller, Foreign Minister Marcelo Ebrard, Defence Minister Luis Cresencio. Both India and Mexico are members of the United Nations Security Council (UNSC) for the 2021-22 time period.

"Two continents. Two civilizations. Shared concerns. Participated at an event on Returned Heritage in Mexico City. Pleasure to meet President López Obrador there," Jaishankar wrote on Twitter with an image of the Mexican President from the exhibition.

One of the India's second-largest trade partner in Latin America is Mexico and it holds a significant role in the economic development of the country. Furthermore, India's exports and imports with Mexico are valued at more than 10,000 billion US dollars.