Did the building of Birla Temple in Delhi end an era of fear for Hindus? 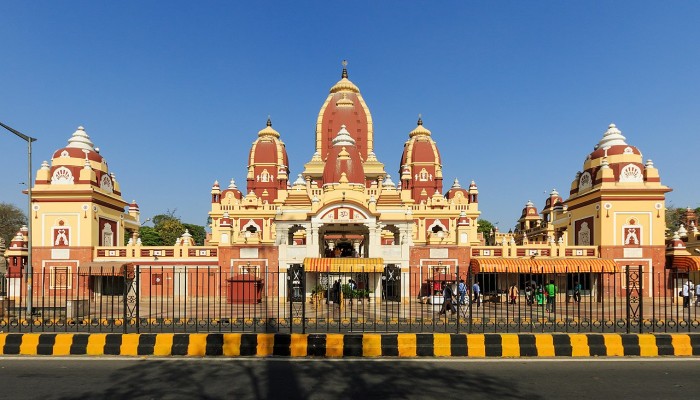 A story I heard almost forty years ago comes to my mind as I write this.

It was somewhere in the late seventies when my father used to work in Gol market in New Delhi and the school where he taught was next door to Birla temple. My memories are of numerous visits to the temple which was next door to the school and where I used to go often. On one such visit, I heard this conversation between a white couple and their tourist guide. I realized they stood next to me and talked loudly. They had just come back from a visit to the south of India and were talking excitedly about the temples they had visited there and were kind of disappointed with Birla temple. They were talking of Meenakshi temple in glowing terms, the one in Chidambaram and others dotting all over south India. They were saying that they felt spiritual presence just being there even though they were Christians. The grandeur and the aura of those temples almost seemed to have cast a spell on them.

The guide was trying to explain that Birla temple was the biggest one in Delhi and the best of its kind in architecture. He told them that Mahatma Gandhi himself came to inaugurate it and insisted that all castes and creed should be allowed to come here. The temple was built by Birla, an industrialist, he added. In ancient India, most temples were built by big traders and lives revolved around it. It was a cultural and spiritual center for Hindus at that time.

The man turned to the guide and said, “What you are saying is right, but this is not a medieval or ancient temple. This is a rather new temple, isn’t it, only built in 1936, not even fifty years old? Where are the older temples from the medieval times with their grand architecture worth seeing?”

“There are none left,” the guide said.

“That’s strange, isn’t it? Delhi has been a city with a majority Hindu population. Hindus were known to build magnificent temples. The traders, the kings, the people all contributed to it. Where are the big temples?”

“They were all destroyed long ago.”

“And no temple built after that till now?”

“No. There were temples but so small that they didn’t attract attention.”

“Yes,” the guide added, his voice straining to come out. “The destruction of many of the temples put so much fear in Hindus that they never thought of building large temples of architectural marvel that exists in the south.”

“Why should it be fear? Why not either anger or sadness?” the man asked.

“Try to imagine those times. When they destroyed the temples, it was just not an assault to destroy the faith of Hindus. It was accompanied by threats to convert or die.”

“How do you as a Hindu, feel talking of all this?” they asked the guide.

“What can I do?” He asked defensively.

The couple consulted their tourist guide. “Nothing of this sort is written here either. Here it is written that the last Hindu king of India was in 11th century.  Name - Prithiviraj Chauhan. After that it was Muslim rule. So what happened to the temples that existed till then at that time? And were no large temples built after that till now for almost thousand years?”

The man said, “Hindus are very fond of going to temples in the mornings and evenings and on all religious festivities. The temple was the center of the town where everyone collected and prayed. By destroying them and not allowing them to come up the rulers made sure that they don’t become a group politically and never gain any strength.” She added, “In the south I see Hindus celebrating their festivals in large groups but in north I see you pray inside homes. I saw that in Kashmir.”

“Yes the biggest persecutions of Hindus happened in Kashmir,” the guide said. “I was told,” the guide added, “that when this temple came up, the architects who built it cried with joy realizing what a historical moment it was for the people of the city but they kept quiet about it.”

“But you never advertise this. Because you as people are still scared and don’t think it would last.”

“Maybe. It is nothing to feel great about and you would rather do it as silently as possible. Who wants to be reminded of a history of shame and humiliation?”

“So Hindus of the city were terrified of temples being brought down and didn’t dare to think of building any new temples after old ones were all destroyed. No new ones were allowed to come up. Is the fear still there?” the couple asked.

“I am not a historian. I don’t know about that,” the guide said, “but I know one thing. I have been a guide here for many years. You are not the first one to ask me this and only the foreign tourists note this difference. It is they who ask this question to me, never an Indian tourist.”

“The culture of silence about perpetrators, we have seen this everywhere, in Africa, in places where there was slavery,” the couple said before walking away.

I never forgot this incident. Those words stayed etched on my mind. I told my father when we were going back. He nodded his head in silence and said that I shouldn’t talk of this to anyone even though it is true. That fear remains in our identity as people, a force so deep inside us that pulls us down as people from gaining our self-esteem and identity.

“This is not a topic we Hindus talk about.” My father simply told me.

I asked this question to many people after this. Was the fear so deep that Hindus didn’t dare to build any temple for eight hundred years?

The answer was always yes. One renowned Marxist professor of history whom I asked replied that invaders have always behaved like that in every culture and then said, “Do you want to create a riot through this discussion?”

One thing that happened to me as a result of this conversation was that Birla temple became a symbol of another kind quite apart from it as a divine place. It became the sign of aspirations of a people who had suffered persecution of their faith and built as a symbol of resistance and resurgence. Even though I was never religious as such that place now signified a transition to a new era, a place of pride that a society could claim as its roots taking place again.

Since then I have visited the temple many times and each time I was reminded of that conversation. I remembered the conversation in great detail and vividness.

As I went on to become a psychologist and studied trans generational trauma, I understood the grief of different societies and understood how societies stay in grief and denial, sometimes for centuries.

In the years since then whenever I have gone around Delhi, I have seen many a medieval mosque dotting the skyline across the city. Jama masjid, Sunheri masjid, Khirki masjid, Moth masjid and many others. But I never saw any medieval temple. Where did the Hindus, our ancestors prayed then? How did they feel inside to not have a single grand religious structure in comparison to all these mosques? To not be able to pray where once you could without fear? Were they not then ‘dhimmis’ or second class citizens in the capital of their own country?

The oldest Christian church built in Kashmiri gate, St. James church, was built two hundred years ago, more than a hundred years before Birla temple, the first large temple to come up in Delhi. But through the entire 18th century there was no large temple built in Delhi. The reason perhaps was obvious. Even though Hindus had money, they could never build one till the freedom struggle gave them the inner transformation to rise above the fear that had chained them for so long. The emotion that had been killed centuries ago needed the flame of freedom to ignite them and inspire a people from slumber.

Then how did the Hindus find the determination to build a magnificent temple as late as 1936? I had asked an eminent historian. He confirmed my assumption. “Because the freedom movement at its peak instilled in Indians a feeling to reclaim their roots and correct the wrongs of the past. The movement gave a courage to the people that they had not felt in themselves for a long time.”

“Why it is not written anywhere or discussed?”

“Maybe because it is so painful.” He had added then.

My subsequent work as a psychologist taught me there exists something called trans generational trauma that encodes and preserves the real history of a people, their stories of persecution and atrocities, through storytelling and memory that is etched permanently in the collective consciousness of the people.

For many races that faced atrocities and annihilation, there remain issues that the people go silent about, often for generations. Issues that are painful and reminder of a humiliation for not able to protect the deepest, the most cherished values of what it means to be a people. But as time goes by and the clouds of the past lift up one day, they tell us about a story that just lurks around the corner waiting to be heard.

My book ‘The infidel next door’ explores the roots of that fear through a story that remained part of our society for centuries. Hundreds if not thousands of temples were destroyed by conservative estimates and were desecrated and burnt  down as late as 1990 in Kashmir. It is not the numbers that matter I believe. It is what they caused to the Indians. My book talks of how they felt and how this emotion stays in the hearts of our people.

In a way, it is the story of every Indian who needs to understand how fear and resilience alternately shaped our memory and collective consciousness. It also won’t rest till we find an answer and correct that injustice. I believe that when that memory is shared and acknowledged, it can lead to closure and towards healing and reconciliation for all of us.