A Demographic Warning for West Bengal 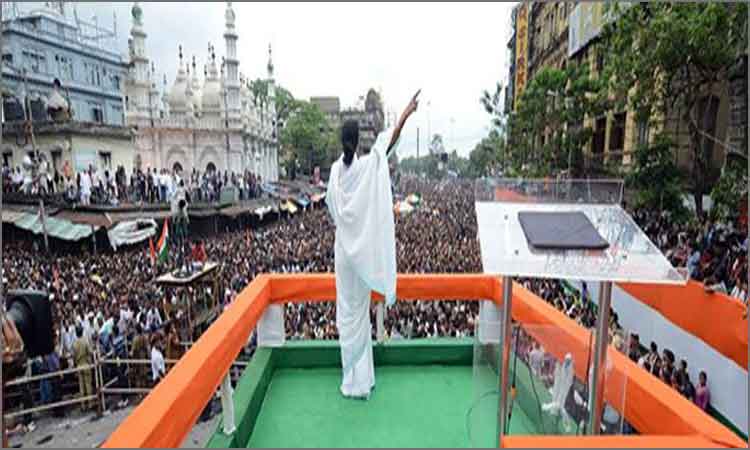 Demography change, like climate change, elicits opinions on both extremes â this phenomenon is perhaps nowhere more visible than for the province of West Bengal in India. On one-hand, the deniers refute any prospect of upheavals in the religious demography concerning the percentage of Hindus and Muslims. On the other hand, the dooms day proponents believe that the state is already Muslim majority, or at best such a prospect is imminent, and may even be realized in a decade or two. In recent times, it has become customary among a non-negligible section of the Indian Right-Wing to refer to the state as `West Bangladesh', implying the possibility of its secession to the neighboring Muslim majority nation.  Clearly, not more than one of these extremes can be the truth, while both may be false. A rigorous, objective and disinterested analysis of the census data utilizing established statistical tools for predicting demography is therefore in order, to extract the truth from the muddle of the hype. This is what we seek to accomplish in this article drawing from the evolution of the religious demography as reflected in the census of the last fifty years.

Note that for Dinajpur the year of Muslim majority predicted under the Polynomial and Constant Growth models widely vary from the logistic model. We believe that the first two capture the reality, and explain the discrepancies shown by the logistic model later in the article.

Table 2: In this table, we have presented the percentage of Muslim in 1951, in 2011 and the projected percentage in 2061 by the three methods.

We next consider the districts bordering Bangladesh.  There are seven border districts, namely; Koch Behar, Jalpaiguri, Dinajpur, Maldah, Murshidabad, Nadia and 24 Paraganas (includes both North and South 24 Paraganas).  Of these, Jalpaiguri shares only a small border and is more than 80% Hindu in 2011, so the majority group will not switch in the next 50 years.  Dinajpur, Murshidabad and Maldah were analysed in the previous set of districts.  None of the rest, that is, Koch Behar, Nadia, and 24 Paraganas will be Hindu minority in 2061, as the statistical predictions presented below indicate.

Finally, we assess whether the total population of West Bengal will become Muslim majority in the next 50 years:

Table 4: The actual Muslim percentages of West Bengal in 1951 and 2011 and the projected percentages in 2061 by the three projection techniques

From the above table, it should be apparent that the population of Bengal will remain Hindu majority in 2061.  However, the percentage of Muslim population is approximately doubling in a span of 100 years (40% Muslims in 2061 starting from 19% in 1951), which is a substantial increase by any yardstick.  This is despite the fact that a large number of Hindus have immigrated from Bangladesh contributing substantially to the total number of Hindus in West Bengal.

Section A: Districts where Hindus already are or may become minority:

Out of the districts in West Bengal, there are four districts where Hindus are a minority or may become a minority within the next fifty years.  Three of them â Murshidabad, Maldah and Dinajpur â are border districts.  The fourth is an interior district â Birbhum.   Note that both Dinajpur and Maldah had their district boundaries changed, so the percentage of Muslims changed rapidly between 1951 and 1961. We have predicted the percentage of Hindus and Muslims in all these districts by three methods mentioned below. 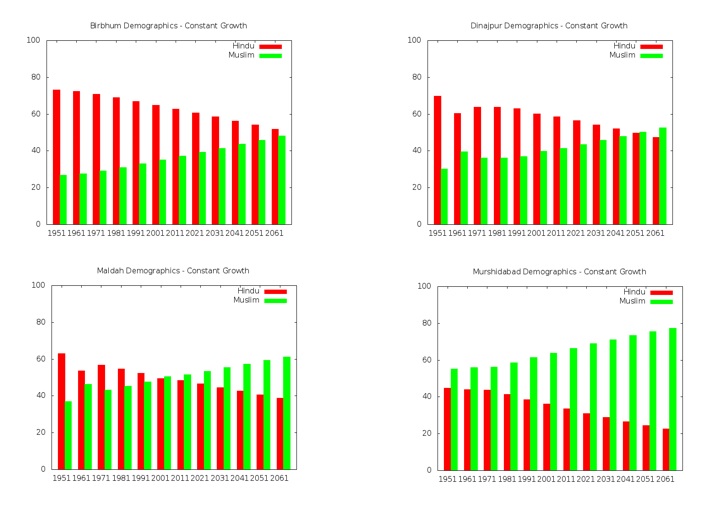 In this model, we fit cubic polynomials, minimising least square error, to the data points and extend them to the future to obtain the predictions.  In the case of Dinajpur, the mean square error turns out to be high for a cubic curve. This usually happens when the past data points are not monotonic (constantly increasing or decreasing) which is the case for the percentage of Hindus and Muslims in this instance. In such cases, as when the data points change the direction of growth multiple times, lower degree polynomials fit the data points better. So we have used a quadratic polynomial. The various percentages are shown. 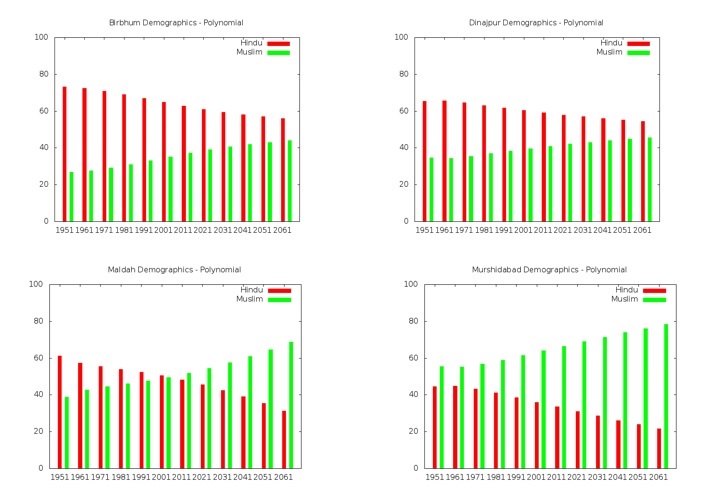 From the above graphs, it should be apparent that the two districts, Maldah & Murshidabad, that are already Muslim majority, will be the only ones that will be Muslim majority in 2061 too.  Even Dinajpur will have a Hindu majority in 2061 according to this model.  Birbhum will have a clear Hindu majority of >55% Hindus.   However, Murshidabad and Maldah will have very significant Muslim majorities.  The percentage of Muslims in Murshidabad will be 78 (up from the present 66) and the percentage of Muslims in Maldah will be 68 (up from the current 52).

Here, we fit logistic curves (sigmoid curves) to the data points minimising mean square error in the process.  The resulting curve gives the following percentages of Hindus and Muslims: 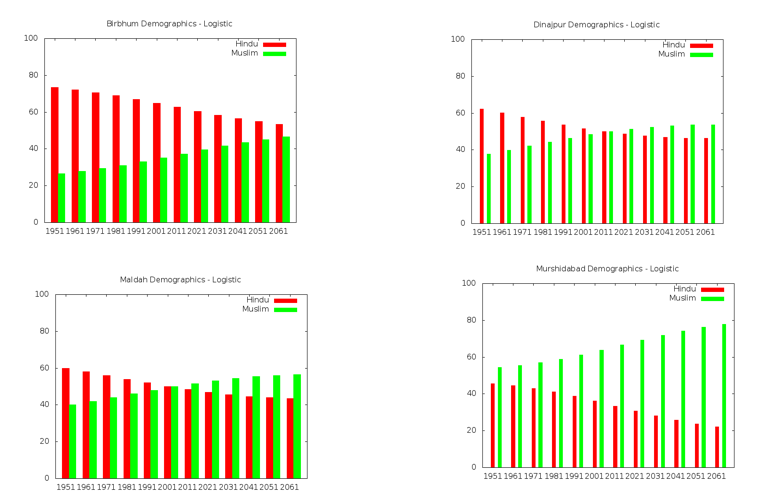 Of the seven border districts, three, namely Maldah, Murshidabad, Dinajpur, have been dealt with in the previous section.  Of the remaining, Jalpaiguri has a Hindu population of >80% and shares only a small border with Bangladesh.  Hence, it has not been examined here.  The other three districts â 24 Paraganas, Nadia and Koch Behar â will now be examined.

As previously, we consider the future growth rates for each group in each district as the average growth rates of the same in the last two decades.  The graphs have been shown below. 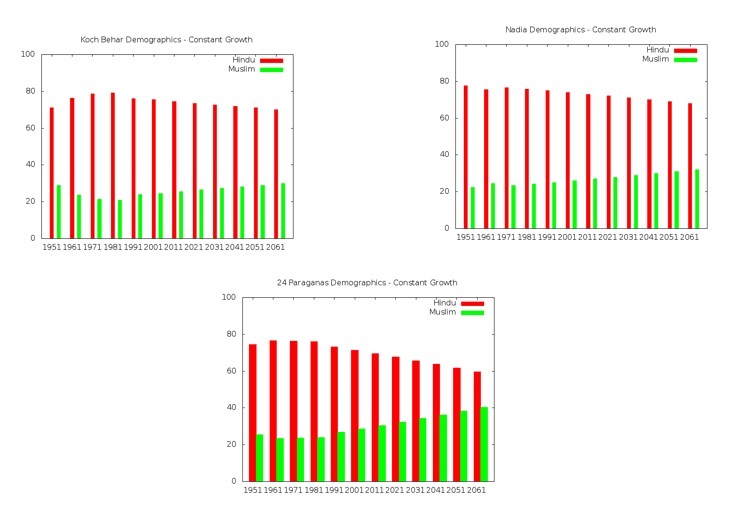 From the above graphs, it may be seen that none of them stand any chance of becoming Hindu minority in the next 50 years.  However, by 2061, 24 Paraganas may have a Muslim population of 40% of so, starting from about 25% in 1951, which constitutes a 60% rise over the 100 years from 1951.  Of the other two, Nadia shows a Muslim population of 35% and Koch Behar slightly higher than Nadia.

We fit a quadratic polynomial to Koch Behar and Nadia to predict the population change.  A cubic polynomial makes a bad fit in the case of both Nadia and Koch Behar due to the multiple changes in the direction of growth of percentages in the data points involved.   However, we have used a cubic polynomial in the case of 24 Paraganas because the past data points are monotonic (either constantly increasing or decreasing).  The predicted percentages are shown in the graphs below. 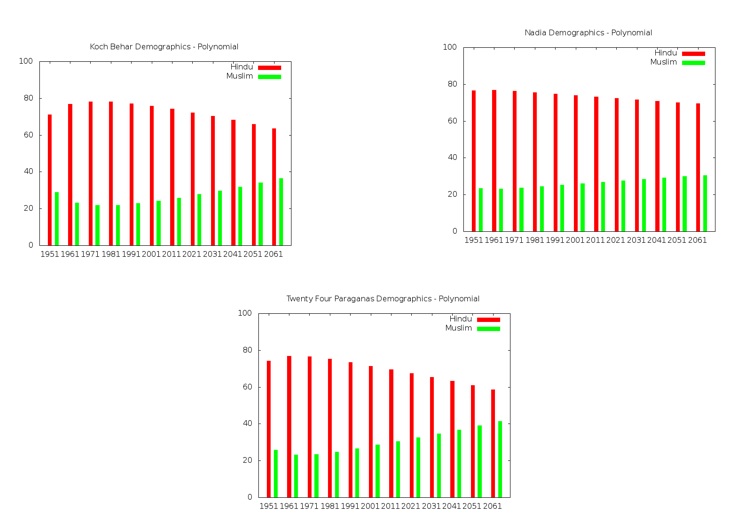 The curves representing percentage of Hindus and Muslims are shown below: 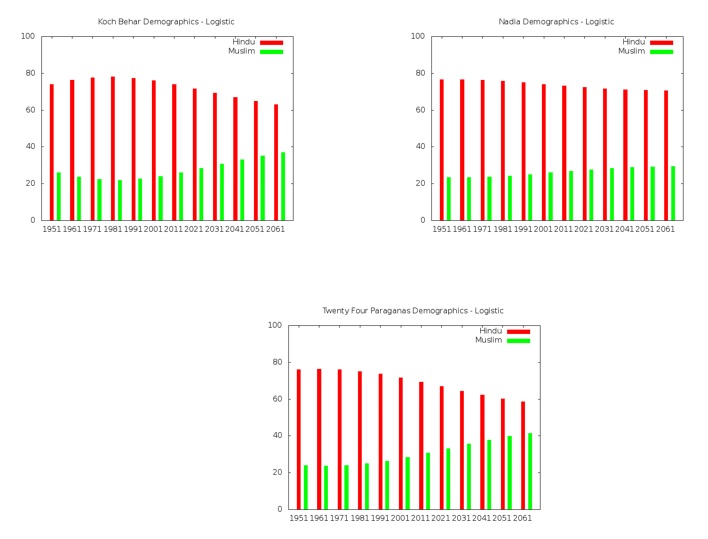 By 2061, 24 Paraganas will have slightly >40% Muslims and Koch Behar will have close to 40% Muslims.  Nadia will again have a Muslim percentage of close to 35%.

Overall, the predictions using all the different projection techniques, show that the Muslim percentage of the border districts will be very significant, even if they are Hindu majority.

We first present the curves we obtain from the three models: 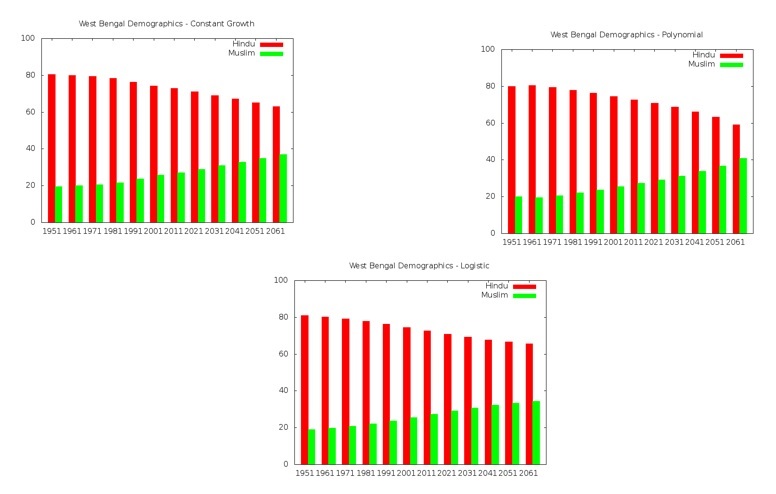 All three models show that the percentage of Hindus in West Bengal as a whole will vary between 60 and 65%. Of the three techniques used to model the West Bengal demographics, the (cubic) polynomial growth shows a clear 40% Muslims in 2061.  All the models show a very significant rise of Muslim population â which will be between 35 & 40% in 2061, starting from 19%  in 1951.

Table 5: The projected Hindu population of West Bengal using a third degree polynomial, with the square error minimised.  The numbers are rounded to the nearest thousand

As may be seen in the above table, the Hindu population actually falls in the last two decades, i.e., the 2041-2051 decade and the 2051-2061 decade.  Thus, the fall of Hindu population due to very low fertility rates, if not reversed, will result in a Muslim majority sooner in West Bengal.  Overall, there is a grim note of warning for West Bengal.

In conclusion, we can say that as of now, there is no danger of West Bengal becoming Hindu minority as a whole, or even many districts becoming Hindu minority, by 2061.  Only three districts are likely to become Hindu minority and one more will be close to it.  Of the three districts that are likely to be Hindu minority in 2061, one (Murshidabad) was already Hindu minority even in 1951.  Indeed, Muslim majority Murshidabad was exchanged for Hindu majority Khulna, to protect business interests in Kolkata.  To keep Kolkata port operational, India needed to control the headwaters near Murshidabad.  Consequently, Hindu majority Khulna was sacrificed by the Congress. Next, a Muslim majority strip from (the then) Purnea district of Bihar was added to Dinajpur in 1951, to ensure the geographical contiguity of West Bengal (which had been sacrificed by the Congress) leading to substantial increase in Muslim populace there.  Thus, starting from about 30% in 1951, the Muslim population exceeded 37% in 1961. It is for this reason that Dinajpur became Hindu minority soon. Nonetheless, many districts, including the 24 Paraganas, Koch Behar, Nadia, and Birbhum will have over 40% (or close to it) Muslims by 2061 owing to the differentials in the growth rates of the two communities.   Muslim growth rate is nearly twice that of the Hindus, and the disparity may just widen in the future.

(This article has been co-authored by Shanmukh, Dikgaj. and Saswati Sarkar)

Shanmukh and Dikgaj and Saswati Sarkar