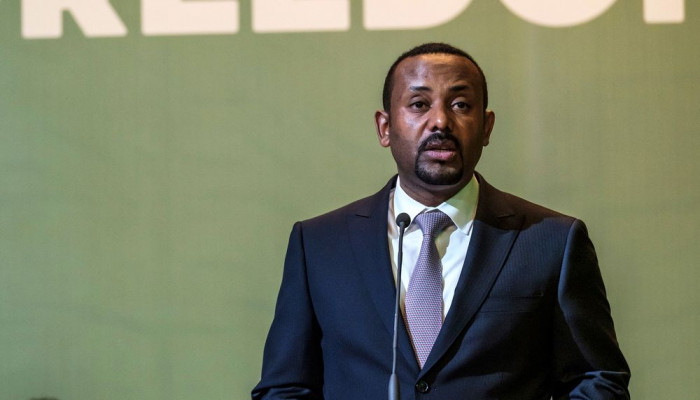 China’s Foreign Minister Wang Yi visited Ethiopia in a show of his nation’s support for Prime Minister Abiy Ahmed’s government amid a year-long civil war with rebels from the northern Tigray region.

Following a joint briefing with the Horn of Africa nation’s Deputy Prime Minister Demeke Mekonnen, a tweet was made an Ethiopian foreign ministry on Wang remarks that said coming to Addis Ababa, the capital, “demonstrates China’s confidence in Ethiopia.”

“China’s confidence in the government of Ethiopia to stabilize situations in the country is demonstrated through my visit to Ethiopia today and China’s restraint from blindly accepting the alarmist calls of the evacuation of citizens from Addis Ababa,” he said.

“China stands against any interference in Ethiopia’s domestic affairs,” Wang said in the tweeted remarks.

He said China has confidence in the capability of the Ethiopian government to take things under control and protect all Ethiopians and Chinese citizens residing in the country.

He finally said that the relationship between China and Ethiopia is and will remain to be solid and unbreakable.

While Demeke said in a statement on the Foreign Ministry’s Facebook page, “The enemy is on its backfoot following the decision of Prime Minister Abiy Ahmed to join the battlefronts.”

Wang’s “visit during Ethiopia’s challenging time shows solidarity and reflects the true depth and strength of the political trust and strategic partnership between the two countries,” Demeke said.

The Deputy Prime Minister and Foreign Minister applauded the long-standing relations and cordial friendship that Ethiopia and China have continued to enjoy by respecting equality, mutual interest, and trust between the two countries.

The government and people of Ethiopia deeply appreciate the balanced, principled, and committed relationship that Ethiopia and China have been able to forge so far, he added.

The discussion between the two sides touched upon the successful outcome of the FOCAC Ministerial Conference held in Dakar where the Deputy Prime Minister reaffirmed Ethiopia’s commitment to the success of FOCAC and bilateral activities.

Demeke also raised the need for more cooperation in financing post-COVID-19 recovery programs extending his appreciation of China’s considerations of debt reliefs in favor of Ethiopia.

He also spoke in detail on the destruction of lives and property due to the belligerent attitude of the terrorist TPLF group.

He said the TPLF demonstrated its indifference to peace efforts while refusing to reciprocate the Ethiopian government’s declaration of the Unilateral Humanitarian Ceasefire last June.

Last November, Abiy ordered a military incursion into Tigray after accusing forces loyal to the dissident Tigray People’s Liberation Front of raiding an army base to steal weapons.

Ethiopia has longstanding relations with the U.S., its significant donor, as well as China, the nation’s biggest bilateral lender. But Wang’s visit brings to the fore a stark contrast of how the powers are responding to Ethiopia’s worst crisis in decades.

The U.S. last month suspended duty-free access to its exports after it said Ethiopia wasn’t in compliance with the eligibility requirements of the African Growth and Opportunity Act because of gross human-rights violations.

Ethiopia accused its critics of not calling out the rebels over atrocities, and has expelled some diplomats for allegedly interfering in its affairs.

Abiy said he’s leading the fight against the rebels from the battlefront, and his administration on Tuesday and Wednesday announced making headway.

This comes weeks after the TPLF gained control of key towns, raising fears that they could sever trade routes or even stage a strike against the capital.