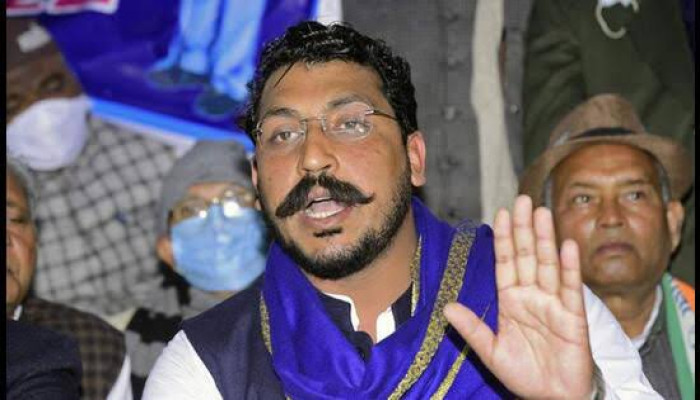 Bhim Army chief Chandrashekhar Azad on Sunday at a press comference in Lucknow announced an alliance of 35 smaller political parties for the UP polls. The new alliance has been named the Samajik Parivartan Morcha.

Azad said the alliance will not field a candidate against Samajwadi Party chief Akhilesh Yadav who would contest from Karhal in Mainpuri district. Prominent OBC leaders who joined the alliance included Babu Ram Pal and Raj Kumar Saini.

Earlier, he announced that he would contest the election from the Gorakhpur urban assembly seat against chief minister Yogi Adityanath.

“The Azad Samaj Party (Kanshi Ram), the political outfit of the Bhim Army, has formed a pre-poll alliance with 35 smaller political parties to contest the UP polls,” Chandrashekhar Azad said on Sunday as quoted by the HT. The alliance will field candidates on all the 403 assembly seats in the UP polls, he said.

Chandrashekar Azad said the Azad Samaj Party (Kanshi Ram) will not tie up with the big or established political parties but will form an alliance with the smaller political parties who are fighting for the rights of the Dalits, OBCs (other backward classes), tribals and Muslims. The alliance will release its manifesto for the assembly elections soon, he said.

The announcement by Chandrashekhar Azad comes a day after All India Majlis-e-Ittehadul Muslimeen (AIMIM) led by Asaduddin Owaisi on Saturday announced the launch of Bhagidari Parivartan Morcha of five political parties.

Owaisi had said the alliance had kept its doors open for other smaller parties, including Bhim Army.

Chandrashekhar Azad said he will launch his election campaign for the Gorakhpur urban assembly seat within a week. He will also hold a virtual meeting with the party workers in Gorakhpur and the work to establish committees at booth level has started.