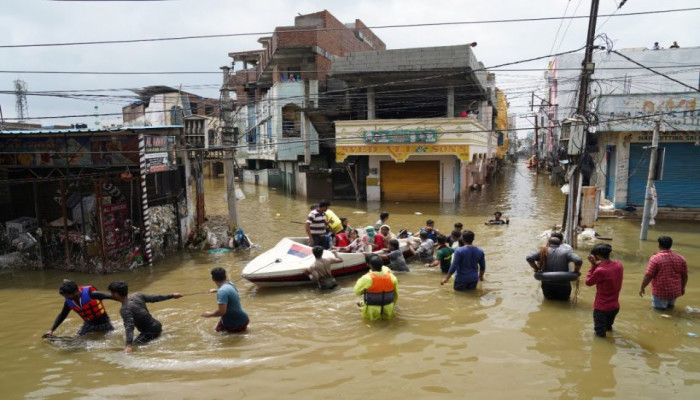 The Central government on Tuesday stated that the Telangana government has not submitted any report or proposal to the Centre on the losses suffered on account of the heavy rains and flash floods in recent months.

The Centre also informed Parliament that as many as 25 states have submitted proposals seeking compensation for losses caused due to heavy rains this year but Telangana did not.

The TRS was accusing the BJP-led government at the Centre of discriminating against Telangana in the sanctioning of funds. The BJP held the TRS government responsible for this situation saying the state government failed to send representations to the Centre seeking funds for various purposes.

The Centre also stated in Parliament that the TRS government also failed to pay its share of premium to claim compensation for crop damages caused due to heavy rains. Crop damage claims amounting to Rs 951.21 crore of Telangana farmers are pending for previous seasons due to non-payment of the state government’s share of premium of Rs 468.55 crore.

Lakhs of acres of standing crops and roads over an extent of thousands of kilometres and hundreds of houses were damaged. There were also deaths of hundreds of cattle from several districts in Telangana due to heavy rain and flash floods between July and October this year.

To a question raised by TRS members in Lok Sabha Venkatesh Netha, Pasunoori Dayakar, Kavitha Malothu on the damage caused to Telangana due to the recent rains and the monetary assistance extended by the Centre, the reply from Union minister of state for home, Nityanand Rai, was- "Various states in the country have been affected by natural calamities, including rain, flash floods, floods, landslides, cloudburst etc during the monsoon season of 2021. State-wise details of the losses to human lives, damage to property and loss of crops due to hydro-meteorological calamities including floods, landslides, during the year 2021-22, as assessed/ reported by the state governments/ Union Territories have been tabled in the House. No such details of losses have been reported by the state of Telangana so far."

"The data revealed that neighbouring Andhra Pradesh has submitted a report to the Centre stating that standing crops over an extent of 1.51 lakh hectares, 4,026 houses/ huts were damaged. Besides, there were 2,875 cattle deaths and loss of 40 human lives due to the heavy rains in 2021.”

To a question from Congress MP Revanth Reddy on whether insurance companies have not made payments to farmers in Telangana against the claims made under Pradhan Mantri Fasal Bima Yojana (PMFBY), the reply came from Union agriculture minister for agriculture Narendra Singh Tomar, who said "The claims amounting to 1 951.21 crore of Telangana State for the previous seasons are pending due to non-payment of the state government’s share in the premium subsidy of Rs 468.55 crore."

"The central government is regularly persuading Telangana through meetings, written communications etc to pay its share in premium subsidy so that the claims of eligible farmers can be settled by the concerned insurance companies," Tomar added.