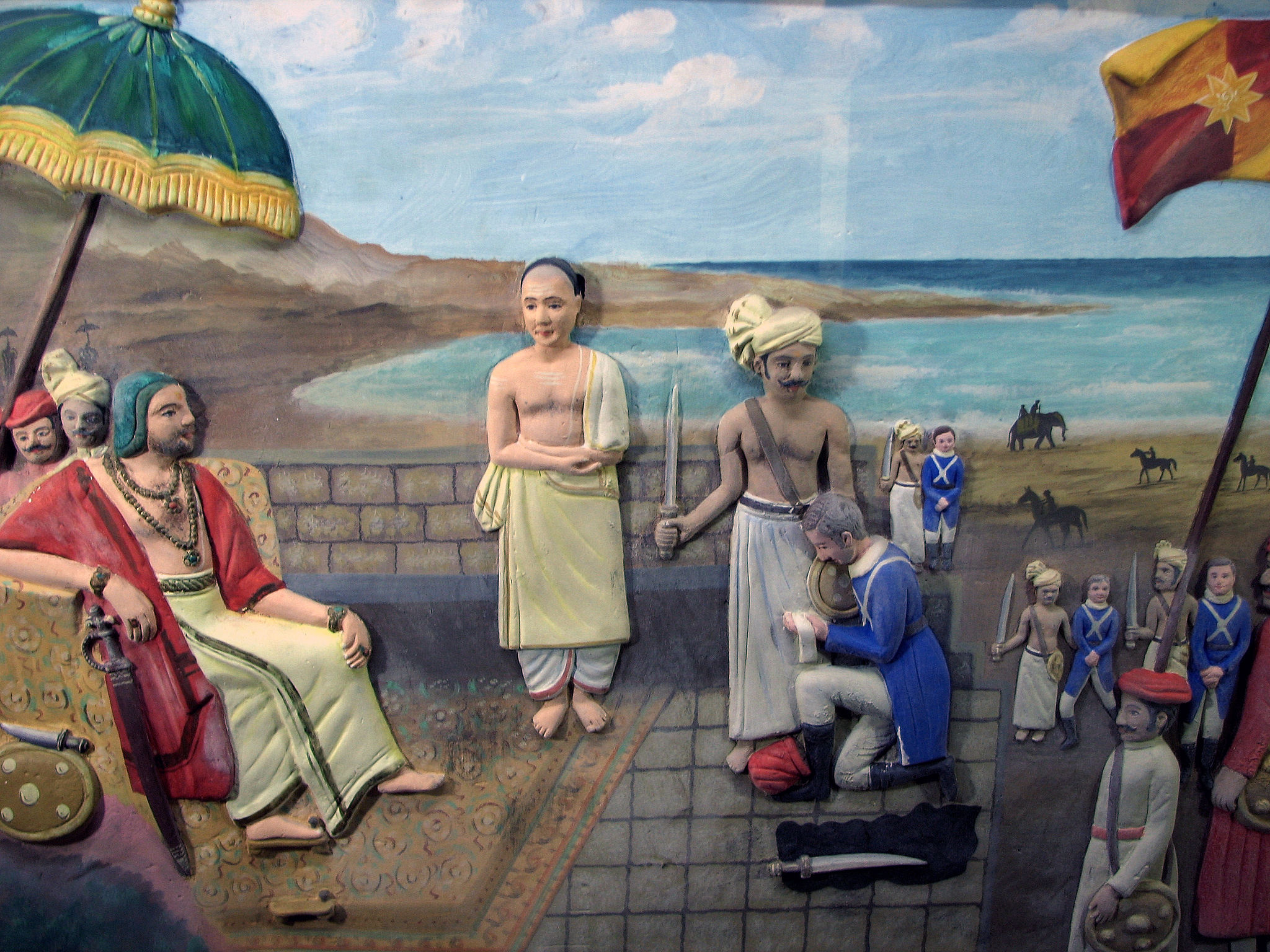 A lion-hearted lady who took on the Portuguese, a King who ousted the Dutch from India forever, and a local chieftain who with his tribal militia, sent tremors down the British ranks. India had its share of kings and warriors, brave-hearts riding into the battle and making the enemy tremble. But thanks to centuries of loot and destruction heaped on us by the Persians, Greeks, Romans, Arabs, Turks, Mughals, Dutch, Portuguese, French and British, we forgot the art of admiring our heroes. We forgot that Bharat Varsha is the land of the valiant. Here I present three unsung stories from the southern coast of India on the occasion of the 68th independence day of our country.

Travancore, a tiny kingdom in the southern tip of the peninsula holds the reputation of being the first Asian power to beat a European force in a land and sea battle. The sovereign was, powerless under the willful nobles of the state when Anizham Thirunal Marthanda Varma was born in 1706. Clever and pragmatic Varma prompted his uncle Maharajah Veera Rama Varma to sign a treaty with the Madurai Nayaks in order to check the nobles and other rebellious chieftains. As a result, he had to live in exile for a while. After his ascent to the throne of Travancore in 1729, at the age of 23, he went on to organize a standing army crushing the powers of the Nair gentry and planned to annex adjacent principalities. Several battles were fought against Quilon and Kayamkulam. The Dutch, who was supporting the Kayamkulam Rajah asked Maharaja Marthanda Varma to stop the hostility. Raja replied the Dutch that they need not interfere in the affairs of the locals. Then the Dutch governor Van Imholf threatened to invade Travancore and Marthanda Varma replied stoutly that in such a situation, he would attack Holland with the help of fishermen! We never got the opportunity to know about such an encouraging brave statement as it has been omitted in our history lessons. The Dutch artillery under Commander Dâlennoy landed in Colachel and marched up to Padmanabhapuram, then the capital of the state. But the Dutch had to be in a defensive position because of the local fishermen who joined the fight against the foreigners. Later, on 10th August 1741, the Rajahâs Personal Nair Brigade from Thiruvananthapuram demolished the Dutch contingent in Colachel. Twenty-four Dutch men, including commander Eustachius DâLannoy and his second in command, Donadi were taken prisoners. Later, commander Delannoy played a role in modernizing Travancore army and served for decades. The 9th and the 16th battalions of the Madras Regiment were formed by incorporating the erstwhile State Forces of Travancore, the Nair Pattalam units which fought the Dutch in 1741.

We can see a Victory Column at Colachel erected by the Travancore state to mark this historic triumph with these words engraved on it â âIn remembrance of all the brave men of Travancore Army who laid down their lives in defeating the superior Dutch forces during the Battle of Colachel in July 1741â. The battle of Colachel shattered the Dutch dream of the conquest of Kerala. They signed a peace treaty with Travancore and later sold their forts, which helped in keeping Tipu Sultanâs army at bay. The Dutch could never recover from this debacle and they were no more a threat for India.

Later half of the eighteenth century was charged with turbulence in Malabar. The invasions of Hyder Ali and his son Tipu has debilitated the region. Unlike some local chieftains, Kerala Varma Pazhassi Rajah of Kottayam, in North Kerala, refused to leave the land and its people for fate and chose to fight invaders with them. His troop included Nambiar, Thiyya, and vanavasi militia of Kurichiya and Mullukurumba. Violating an agreement of 1790, which recognizes the sovereignty of Kottayam, the British ascertained their supremacy after the third Anglo â Mysore war in 1792. Pazhassi Rajah led a mass resistance movement against the exorbitant taxation system imposed the British. On June 28, 1795, the Rajah not only stopped all tax collections but also gave refuge to people who were considered rebels by the British. Before the British troop under Lieutenant James Gordon came to arrest the king in his palace, he fled to the forest of Wayanad. Gordon plundered the traditional treasure from the palace and this again infuriated the Rajah. Rajah cut all communications between Wayanad and Lower Malabar. Angry British could do nothing but wait for reinforcements. In July 1797, frustrated British appealed for peace. However, the harmony couldnât continue for long. After the death of Tipu, British took over Wayanad and decided to attach it to either Canara or Coimbatore. Since Wayanad was traditionally a part of Kottayam kingdom, Pazhassi Rajah took this move as an encroachment into his liberty. British commandant, Arthur Wellesley built roads and amenities across Wayanad in order to move the troops. Pazhassi also began to prepare and recruited more people for his army and waged a full-fledged Guerilla warfare from the ranges. Although the British executed his supporters Chuzhali Nambiar, Peruvayal Nambiar, and Kannavathu Shankaran Nambiar, Pazhassi continued his battle. Vanavasi warriors led by Edachena Kunkan and Thalakkal Chanthu seized Panamaram fort killed the 25 British soldiers. By the end of 1803, Rajaâs men reached as far as Kannur and Thalasseri. Encouraged by the victory, a popular force captured Calicut Sub-Jail in March 1803 and killed all guards and secured the ammunition. They also released prisoners, many of whom joined the front. Wellesley, who left to Europe then, became famous by defeating Napoleon in Waterloo, but Pazhassi Rajah and his native tribal force literally tore him down. In fact, Wellesleyâs experience in war with Pazhassi equipped him to beat Napoleonâs army.

Thomas Hervey Barber, a wily man took the charge of the local operation of the British. Since, British checked a strike led by Kalyat Nambiar in Chirakal region, the guerrilla force had to retreat once again into Wayanad forest. Meanwhile, the Company constituted a new band of soldiers, Kolkar, from the local population. British announced a bounty on the Rajah, his associates, and their family. After a series of relentless battle with the tribal militia, the company of 2000 Sepoys and 1000 Kolkar could capture Thalakkal Chandu, the noted Kurichiya hero. Utilizing the pause brought in by the heavy monsoon and harsh climate of Wayanad, Kunkan mobilized the tribal soldiers as well as Nairs ( even rich, affluent Chettiyars and Gaundas actively supported the Raja). They were stationed near the Pulpally Sita Devi Temple. On 30 November 1805, near Mavilan thodu near Kerala â Karnataka border, after a fifteen-hour long intense fight, British declared the Rajah dead. However, the local people still believe Pazhassi Raja killed himself before being slain by the enemy. Even though the British themselves admit that they couldnât easily find informers and traitors among the natives, proper manipulation of those few the British could manage to get ensured the fall of the Keralasimham (Lion of Kerala).

T.H. Baber wrote about Pazhassi Raja; âHe was one of the natural chieftains of the country and might be considered on that account rather as a fallen enemy.â âThus terminated the career of a man who has been enabled to persevere in hostilities against the company for near nine years, during which many thousand valuable lives have been sacrificed and sums of all money beyond all calculation expendedââ he writes. Pazhassiâs âannihilation became necessary for the stability and security of the Government.â Baber calls Pazhassi an âextraordinary and singular characterâ and âthe records of India and England will convey to posterity a just idea of him.â

The underlying envy in Baberâs words reflects the reason why the fearless warrior King is still revered by the people of Malabar. He was one of the earliest freedom fighters of our land equal to Chhattrapathi Shivaji in courage and stratagem. He had to fight against two invaders simultaneously, the Mysorean Haider Ali and Tipu as well as the British Company, yet he defied Mysorean raiders for nearly twenty years and the British for Ten years.

The Jain queen Abbakka Chowta was the ruler Tulunadu who fought the Portuguese in the 16th century. According to popular legends, young Abbakka grew up as brilliant archer and sword fighter. The prosperous and crucial port of Ullal near Mangalore was also her capital city after Moodubidri. Following the subjugation of Goa, the Portuguese made several attempts to capture Ullal as it was strategically placed. But Abbakka snubbed all their attacks for over four decades. Disregarding the Portuguese, she allied with Zamorin and continued trading spices and other goods to Arabs. The Portuguese seized the ship in mid-sea. Infuriated Abbakka attacked the Portuguese factory in Mangalore fort. The Portuguese asked to pay tributes and Abbakka clearly rejected it. In 1555, the Portuguese sent Admiral Dom Ãlvaro da Silveira and was defeated by Raniâs force in the battle followed. Her army also was constituted of people from all sects and class including Moggaveeras, a local fishing community. In 1557, after plundering the city of Mangalore and setting the entire city on fire, the pherangis attacked Ullal. One general Joao Peixoto sent by the Portuguese Viceroy Antony Norohna captured the city of Ullal. However, the queen escaped and retaliated the same night itself and killed General Peixoto and 70 Portuguese soldiers. In further battles, Portuguese suffered severe damage and ran away leaving Mangalore fort. In 1568, the Portuguese not only recaptured Mangalore fort but also took over Kundapur. They attacked Ullal and a series of furious battles took place. Rani Abbakka forged an alliance with the Bijapur Sultan of Ahmed Nagar and Zamorins of Calicut to confront Portuguese. Folklores tell the tale of the queenâs estranged husband colluding with Portuguese who gave away strategic information. She was captured and imprisoned. However, the brave warrior queen revolted in the prison and died fighting. Legends also claim that Abbakka was the last known person to have the used the Agnivana (fire-arrow) in her fight against the Portuguese.

The popular folk art forms like Yaksha Gana (Folk theatre in Coastal Karnataka), Bhuta kola etc. have been singing the legendary queenâs story. But little is written about the resolute Queen of Ullal in the mainstream historical works. She was the first woman in history to challenge the European Colonialists. The independent and patriotic queen rightly deserve the sobriquet Rani Abhaya â the fearless queen.

As the renowned propagandist George Orwell quipped, âThe most effective way to destroy people is to deny and obliterate their own understanding of their history.â We Indians, as a society has been denied an honest narrative of our own stories. We were taught not to celebrate the
glorious record of our folks in fighting the enemy under adverse circumstances. A thorough search through the alleys of Indian history will unfold more tales of valor and resilience.