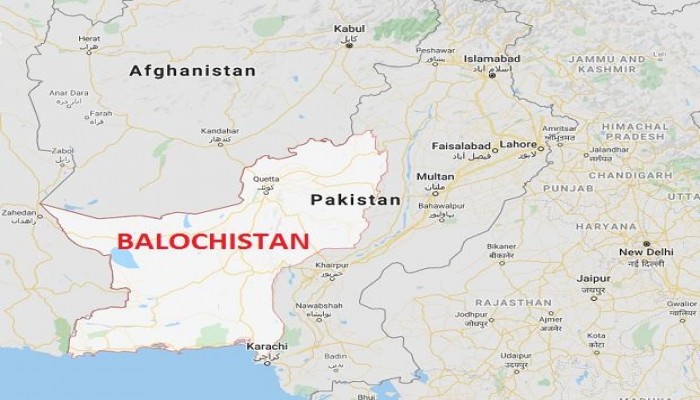 Balochistan has a long history of fighting foreign aggressions, it is the richest region of the planet, Balochistan is full of natural resources such as Gold, Oil, Natural Gas, Copper, Iron, Uranium and other rare earth minerals.

Baloch people are peace loving, secular and believe in democratic values. Baloch had fought against Mongols, Britishers and since 1948 they are fighting to break the chains of slavery, and independence of their motherland from Pakistani occupiers.

It is divided between Iran, Pakistan and Afghanistan. Baloch faces no persecution from Afghanistan government and institutions but they often do face life threats from Pakistan ISI and Iranian authorities because Islamabad and Tehran from day one had been looting Balochistan's sea ports (Chabahar and Gwadar) and minerals.

When British departed from subcontinent after a century of occupation, Balochistan was the first to declare its full independence on 11 August 1947, and Pakistan accepted our independent status. But later Mohammad Ali Jinnah the legal advisor of Khan of Kalat at that time, with the help of British, made a conspiracy and invaded Balochistan's sovereign state on 27 March 1948. Our free state of Kalat Balochistan was attacked by the military and our independence was snatched by the barrel of the gun. The ruler of Balochistan on 27 March 1948 was forced to sign a treaty of accession.

Governor of Makuran, Prince Abdul Kareem Baloch, the younger brother of Khan of Kalat Ahmed Yar Khan took up arms and went to the mountains to fight the forceful annexation of Balochistan by Jinnah’s army because when Jinnah requested Khan to join Pakistan. Both Baloch houses (Upper house and lower houses) of Balochistan assembly at that time overwhelmingly rejected Pakistan's offer to be part of Pakistan.

Khan Kalat's brother Prince Abdul Kareem started resistance movement in 1948 and fought for 3 years. He along with his thousands of freedom fighters went to seek help from Afghanistan. But he was not given enough support, later his struggle weakened and he could not achieve his desired goal of pushing Pakistan army out of Balochistan.

In 1960s Nawab Nauroz Khan Baloch started freedom struggle and fought to free Balochistan but he too faced economic problems and had very limited resources to fight a meaningful battle to compel Pakistan’s army to quit Baloch soil. Pakistan army made a plan to arrest Mr.Nauroz Khan and called him for negotiations. The Islamabad establishment said that if he comes down from mountains, he will not be arrested. But when he along with his 7 other comrades including 3 of his sons arrived for negotiations, all were arrested, tried and sentenced to death. Nawab Naroz Khan Baloch was 80 years old he was given life imprisonment due to his age. He passed away in the jail age of 90.

Pakistan is not only famous for violating international laws but its notorious army is responsible for violating the basic ethics of Islam, Quran, and the holy book of Allah. Nawab Nauroz was guaranteed by the army and Pakistani establishment that if he descends from mountains, he and his comrades will not be harmed. Alas! he trusted Pakistan army and came down for the talks, it was another betrayal of Pakistan army to another Baloch leader.

This liberation war was led by Late Nawab Khair Bakhsh Marri, father of Hyrbyair Marri who is currently leading the Balochistan liberation struggle. Hyrbyair Marri known as Sheikh Mujeebul Rehman and Subhash Chandra Bose of Balochistan among common pro-Baloch freedom masses.  Since 1980s he had been playing vital role to mobilize Baloch masses in and abroad Balochistan.

Jhalawan and Kohistan Marri regions were the battle grounds for a considerable period. According to a rough estimate about 30,000 Baloch were martyred and 5000 Pakistan ground troops were killed. Pakistan army arrested thousands of Baloch civilians and whisked them away. Hundreds were thrown from flying helicopters, and thousands were tortured to death. Hundreds still are alive but, paralyzed, some lost their, eye site, some lost their voice due to brutal torture inflicted by the Army. Some are facing mental health issues. Hundreds succumbed to the injuries and passed away after their release. Those who were abducted are still missing since 50 years. Ironically the entire region, especially our neighboring countries were totally silent on Baloch Genocide committed by Pakistan and Iran. UN didn’t speak about Pakistan’s aggression on Balochistan, which is a violation of international laws.

Marri Baloch, who migrated to Afghanistan were catered by Baloch leader Hyrbyair Marri who used to visit them frequently in Helmand, Kandahar provinces to deliver essential supplies and medicines. Those were extremely horrible times where Balochs were struggling to cope economic hardship and military offensives.

Balochistan and Afghanistan had very friendly relations. Afghan government welcomed Baloch who sought shelter and support. At a time when Soviet troops were stationed in Afghanistan during the reign of President Dr Najeeb Ullah, Marri Patriots fled to Afghanistan. Unfortunately, Soviet Union collapsed due to Pakistan ISI jihad via Mujahideen and Afghan government of Dr Najeebullah was faced enormous pressure from Pakistan and its paid Mujahideens.

Marri Baloch patriots within their ranks, discussed future plan and agreed to return back to Balochistan to continue their struggle of liberation because it was almost impossible for them to live in war-torn Afghanistan. Mr.Hyrbyair Marri and his comrades worked day and night to protect his people after Pakistan army and ISI announced that anyone who will kill a Marri freedom fighter based in Afghanistan and brings proof of that murder will be awarded 5000 Pakistani rupees. The Mujahideens started killing the Marri freedom seeking civilians. Marri people suffered a lot, they had no choice but to go back to Balochistan.

Pakistan ISI sent a delegation to Kabul stating that Nawab Khair Marri will not be allowed to go to Europe, Russia or any other third country. He was forced to return back to Balochistan. Pakistan sent an air force plane C130, Mr. Khair Bakhsh Marri, his senior compatriots and some Baloch key leaders landed in Quetta airport.

In 1992, they returned back to Balochistan, but the freedom struggle was never abandoned. Hyrbyair Marri and his father Nawab Khair Marri continued educating the common Baloch masses. Study circle sessions helped grooming the new comers to join the Baloch cause, it was Hyrbyair Marri who approached the Baloch youth, like Subhash Chandra Bose and delivered speeches that Liberation of Balochistan is the only option for a prosperous Baloch society.

It is worth mentioning that when Baloch people in Balochistan heard that Nawab Marri is being brought back by a plane to Quetta, entire Balochistan gathered at the Quetta airport. Due to huge crowed at airport and surrounding areas, the air traffic control announced that the plane had been diverted towards Islamabad and can't have a safe landing. Literally millions of people waited outside the Quetta airport to welcome Nawab Marri. The flight was delayed by 24 hours but the all ethnic groups of Baloch, Sindhi and Pashtun waited outside airport and camped for 24 hours. This was the kind of overwhelming support Baloch people had towards their leader.

Hyrbyair Marri refused to come by air as he was leading the Marri Caravan of about 200 trucks full of people coming back from Afghanistan. This process took weeks and months to move everything from Afghanistan to Balochistan. The liberation struggle was not stopped. Mr.Marri continued the freedom movement, in 2005 Nawab Akbar Bugti another key Baloch leader, former Chief Minister of Balochistan also joined the cause. Other Baloch masses also became part of this whole movement.

How an independent Balochistan can benefit India?

As I mentioned above, Balochistan is rich in minerals, has two strategically vital sea ports of Chabahar and Gwadar. The population of Balochistan is about 50 million. India needs to prepare herself as a big player to free Balochistan to help the Baloch for their nation building, help to build infrastructure, schools, hospitals, dams, power houses, economy, army, institutions, factories, and provide professional help to develop manpower. Though Baluchistan has vast quantities of resources, it needs help to build a functioning independent state. Right now, Balochistan is totally ruined by Punjabi Pakistan army, resources are being looted, basic infrastructure doesn’t exist in Balochistan. A free Balochistan can be developed into a manufacturing hub by Indian companies. Huge automobile units, defence production units, pharmaceutical industries and other manufacturing enterprises can be built. Balochistan has a huge potential market for India. Geographically Balochistan is very near to India and people of Balochistan are extremely secular and friendly. It is a rare opportunity for India to have the Baloch as its ally in the region.