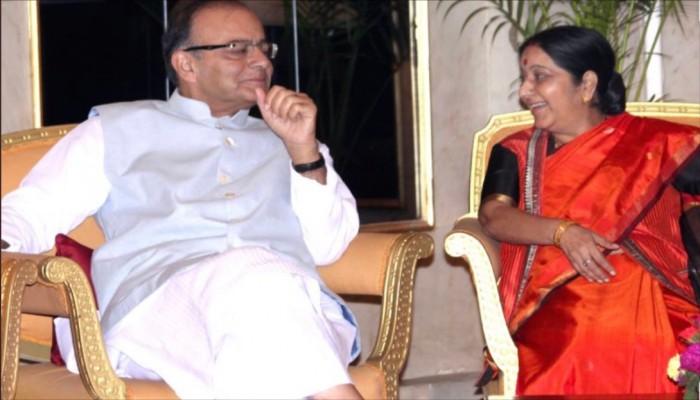 In the pre-2009 election days, I was the typical “liberal” often swayed by what the likes of Barkha Dutt and Rajdeep Sardesai said on television. Though swayed by them, I never could get myself to even remotely think of supporting either the Congress party or the Left parties. The 2009 defeat was sadder than the 2004 one, because I firmly believed it was a very good opportunity lost.

Those were also early days of blogging, and immediately after the 2009 election loss, I wrote a blog titled “The next Vajpayee for BJP”. I voted for Sushma Swaraj. And while doing so, I had also written then why I thought the others won’t fit into that role. Writing about Arun Jaitley, I had this to say – “but his recent behaviour during 2009 polls doesn’t inspire any confidence about his performance at the national level. His choice for the post of Leader of Opposition in Rajya Sabha did raise a few eye brows (justifiably so), “

Today, I have no idea what instances I was referring to when I made such conclusions! Maybe I was swayed too much by what I saw on TV; maybe I didn’t hear enough of him, to understand Arun Jaitley better; but today when I look back and read those lines, I am so glad that I was proved totally wrong. Like a slap on the face. But I am really glad that the slap has awakened me!

While the role of Vajpayee-Advani duo is now being taken care of by the Narendra Modi-Amit Shah duo; we should never forget that for a brief yet very critical time for BJP, it was the Sushma Swaraj-Arun Jaitley duo who have essayed those roles for the party. Their exemplary performance as the leaders of opposition in the Lok Sabha and Rajya Sabha respectively from 2009 to 2014, must be treated as training material for all generations to come. The heft they bought to the role; the dignity with which they conducted the role; the alertness they exhibited in opposing the government’s machinations; the support they extended to UPA in many matters of national importance; the role they played during the turmoil filled days of “Anti-corruption”; and most importantly the way they used their oratorial skills to put forth many complex arguments simply wowed many people like me. Especially Arun Jaitley.

I still remember the 2011 discussion on the impeachment of Kolkata High Court Judge, Soumitra Sen. I was amazed at the mastery he exhibited while making the case against the HC Judge. I was then imagining how his arguments in court would have been. And then have strived to follow almost all of his speeches in Rajya Sabha ever since, often wondering how is it possible for someone to speak like that!

Sushma Swaraj and Arun Jaitley held the BJP baton from 2009 to 2014. We can never forget their role during those testing times. They stood rock like behind the party’s decision to appoint Narendra Modi as the Prime Ministerial candidate. Infact, Arun Jaitley is often credited with getting the then party leadership around to the idea that Modi is the next leader of the party.

2014 to 2019 also surprised many of us. Because most of us only saw opposition leaders Arun Jaitley and Sushma Swaraj. When they were ministers in the Vajpayee government, we were young. We didn’t have media that discussed the work of ministers then. We, ofcourse, didn’t have social media. And now when we look back to 2014 to 2019, can you just imagine a government without them?

Sushma Swaraj’s people connect in a ministry like the External Affairs was something no one even imagined could happen. How she simplified this ministry so that the common citizen has been benefitted, has been written about in great detail.

Arun Jaitley was a different league altogether. Imagine this – in a country of such diverse political parties, Arun Jaitley presided over bringing in the revolutionary GST after getting the go-ahead from every single state government of India. Every single one of them. He then went on to chair 33 meetings of the GST council. All 33 meetings were day long meetings. Decisions and resolutions of all 33 meetings were unanimous. 2014 to 2019 had perhaps the most vicious opposition parties we ever had. In that context (or in any context), I am not able to find the right words to describe the magnitude of this achievement – achieving unanimity in times of such extreme enmity, could have been achieved only by a Arun Jaitley.

To me, 2009 to 2019 was the culmination of an exemplary buildup of careers by Sushma Swaraj and Arun Jaitley. Just in these 10 years, there are way too many achievements to be listed here or discussed about. We not only saw what they were capable of, but we also got to see and hear the many humane stories about them. We got to see how closely knit the top brass of the BJP was.

I had the opportunity to hear Arun Jaitley from close quarters, a few times in this 10 year period. The first time was in 2010, when I didn’t have an opinion either way on him. The party was down. He walked into to a room full of party enthusiasts wanting answers on what went wrong and how we can recoup. That was the first time I saw him patiently listening out to various critiques and then answering them like only he could! The last time I heard him live, was in October 2018 at the India Ideas conclave (and had written about it here). Arun Jaitley was also the first big leader who shared one of my articles on Facebook.

Unfortunately, I never got to hear Sushma Swaraj from such close quarters. But I have been benefitted immensely by the changes she bought into the foreign ministry. And thousands like me too. In the passing away of Sushma Swaraj and Arun Jaitley, we have really lost true leaders who have steadied a rocking boat during a very challenging 10-year period. I feel we are fortunate enough to have been here when they led us.