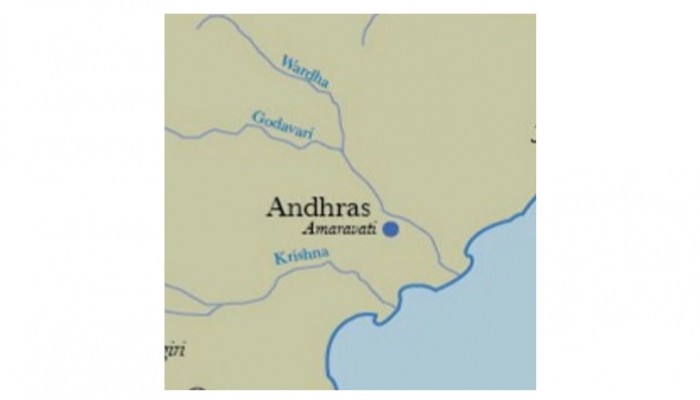 The Aitareya Brahmana is special. On many counts. For one, it is pretty old. In fact it is the oldest brahmana and it belongs to the Rig Veda. Secondly, it contains a profusion of curious historical information about bronze age Indian society, contemporary kings and sages, kingdoms as well as quite a few obscure and named tribes who are yet to plunge into the Vedic pale. The 'Vedic pale', we know from several other indicators, was in the earliest Rig Vedic times and before it restricted to what is now Haryana and it's thereabouts.

One such reference is to be found in verse VII.18 of the text.

VisvÄmitra had a hundred and one sons, fifty older than Madhuchandas, fifty younger. Those that were older did not think this right..Them he cursed (saying) “Your offspring shall inherit the ends" (of the earth). These are the (people), the Andhras, Pundras, Sabaras, Pulindas, and Mütibas,” who live in large numbers beyond the borders; most of the Dasyus are the descendants of VisvÄmitra.

Very little is known about the identity or eventual fate of these highlighted tribes (except one of course). But what we can safely affirm with this crucial reference is that this is the very first time the Vedic literature gives evidence of contact with non-Indo European tribes or even of awareness of the existence of such tribes. We know that they were probably non-Indo European (by speech) because one of them survives to this day and another one (Mütibas) has a clearly non-Sanskrit/non-Sanskritised name. In fact the Sankhyayana Srauta Sutra mentions these tribes again, but there, the Pulindas are omitted and Mütibas becomes/reverts to Mücipáh, again non-Sanskrit.

The Aitareya Brahmana is younger to the Rig Veda Samhita. In the whole of the ten books of the Samhita, there is not a single evidence, by way of reference, loan words or allusion, of the Vedic people having made any contact with any non-Indo European tribe (Austroasatic or Dravidian). The literary evidence of the Rig Veda leaves little doubt that the territories of Sapta Sindhu, Vara Prithvya(in Haryana) and the Gangetic plains were entirely an IE Zone. Even the enemy tribes mentioned in the Rig Veda are clearly IE, on closer examination.

So arguably, the Aitareya represents an era when the Vedic culture had well begun to spread out of Vara Prithvya and into peninsular India. Encountering new tribes of distinct tongues and practices, the rishis and hotris no doubt were forced to make an explanation for their existence- banished sons of Vishvamitra!

They must all have been powerful enough during the bronze age and must have had ritual traditions adequately distinct from the Vedic to warrant such a mention in the brahmana. Of the other tribes, the name 'Pundra/Paundra' etc continue to appear in the later epic literature as a kingdom in East India contemporary to the Vedic Kuru-Pancalas. The territory of the Pundras at least, if not the original tribe, survived into the medieval times. It is epigraphically attested even during the Pala-Sena period, vanishing sometime in the Islamic era.

Dating the Aitareya- As already mentioned, the Aitareya is the oldest brahmana. And the Shatapatha is the youngest. There is an amazing concomitance of the technology, units of measurements, pottery, territory, astronomical references and other details in the Shatapatha with the mature and late phases of the Indus-Saraswathy civilization. It even contains vivid descriptions of kingdoms (Videha, Kosala etc) relocating from the Indus valley to their historical locations in the Gangetic plains. Such a large scale migration is imprinted in the archaeological record only once; During and following the collapse of ISC.

Such being the case, for the sake of conservatism, for now as we await further evidence, we may propose ~2000 BCE as the lower limit for the composition of the Aitareya and by extension, the antiquity of the Andhra people.

Coming back to the purpose of this post, this reference confers on the people of Andhra Pradesh a rare honor- The honor of being the world's oldest surviving ethno-political identity. The world's oldest recorded and preserved identity of a people and their territory.

And it was an interesting irony that Andhra Pradesh was the first state of independent India under the reorganization act, 1956...

By the Mahajanapada age when references are finally more detailed, the Andhras are fully Vedicized, if not already by the brahmana age. Their capital was Amaravati.

Do you disagree? Look at some of the other close contenders-

1. 'Egypt'- Really? Thats a Greek name, nowhere near as old as the Aitareya.That's not what the Egyptians called themselves! And Egypt today has absolutely nothing to do with the Pharaonic civilization.

2. The Assyrian people of the middle east- Hmm...I don't see them on a map!

4. Sindh and Kandahar- The former is just a name adapted from the river and the latter from the name of a very ancient king (Gandhar). Apart from the names, neither has any preserved connections to their pasts.

To all the Andhra people out there- It is amazing how you preserved your ancient identity for so many thousands of years. You truly bring pride to Bharatavarsh.

And your new capital coming up-- Amaravati---named after the old one, there is no doubt it will be magnificent. (But do try and finish it in maybe 10 years, okay?)  'Abode of the immortals' it means!

What a fitting name...