Hamid Ansari disappoints with his parting note, resorts to rhetoric and falsehoods 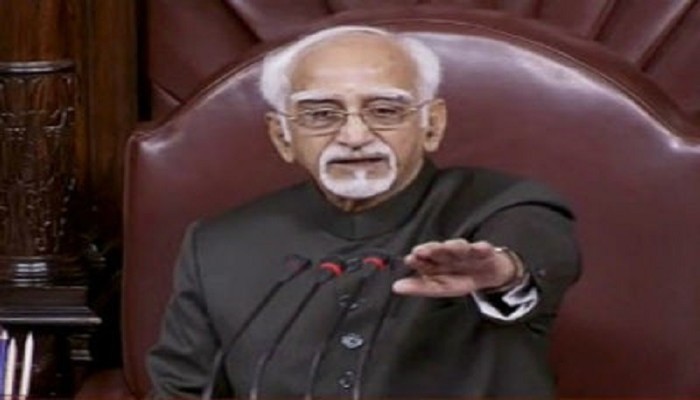 Karan Thapar got this opportunity and he asked/intervened (Well, it’s not a Karan Thapar interview if there are no interventions ;)) a total of 122 questions. Out of which only 32 were related to Rajya Sabha, out of which only 15 were related to *his* actions/decisions as Rajya Sabha Chairman. So barely 10% of the time was spent on his primary role. What about the rest of the 90% then?

“In conversation with Karan Thapar on his last day as vice president, Hamid Ansari talked about growing intolerance, aggressive nationalism, the government’s political inaction on Kashmir and more.”

This very much concurs with the agenda of the Lutyens cabal. And the Vice President obliged the cabal with equally rhetoric answers that have created quite a stir. Before we get into the details of these responses, I would like to highlight the mucky nature of this interview, by highlighting a few questions. Sample the first one below:

KT: You mentioned that on your first birthday as vice president, Dr Manmohan Singh and his wife came over to wish you. I imagine you’ve had three birthdays after Mr Modi took over. Has Mr Modi been to wish you regularly?

HA: Eh, regularly yes. I think the last occasion he was away he sent a message. But first two occasions, yes.

KT: He was there.

From where does Karan Thapar and his ilk get such ideas? If he was pursuing such an irrelevant line of questioning, then why didn’t he ask if Dr. Manmohan Singh and wife came to visit him on every birthday? Better yet, he could have counted the first three years of each PM and made a pie-chart out of it and furthered his research! The cheap line of questioning doesn’t end here – here’s another sample:

KT: Just 48 hours ago or so, the Chinese newspaper the Global Times quoted a Chinese expert who said that a small-scale military operation is possible may be even likely in two weeks. Speaking of the apprehension in India are you apprehensive about this situation?

So now we have to answer based on a “quote” made by an “expert” we don’t know, published in a newspaper we don’t read? Why is KT assuming that the Vice President of the country will feel “apprehensive” about a random quote?!

Let’s anyway get back to the crux of the interview – Shri Hamid Ansari’s views on intolerance, fear, triple talaq etc. The all-knowing Karan Thapar framed the first question like this:

KT: I want to use this moment, Mr Vice President to talk about the general situation in the country today because I know it is one that concerns the large sections of the country.

The classic cabal game – “Many people think(like me)”, “large sections feel (what I feel)”, “I know (everything!)” – where they generalize few occurences to create an atmosphere of fear. However, what is worrisome are the responses of Mr. Hamid Ansari.

He goes on to give credence to these baseless theories, and uses strong language to further perpetuate this fear. He says that a “certain ambience of acceptance” is now “under threat”; that he shares the feeling that “there is growing intolerance in India”, and spoke about it in an event in Bengaluru a few days back. He says that he has based all these conclusions based on “meeting fellow citizens” and reading papers etc.

Author and tweeter, Anand Ranganathan, has busted many of the myths surrounding the branding by the Lutyens media here. Likewise, there are many social media users who have busted many such propaganda machines. As Vice President, was Mr. Hamid Ansari not aware of these statistics? Is it not his responsibility to reassure the people of the nation, that statistics point out to the fact that we are as tolerant or intolerant as we ever were? Is it not his responsibility to chide the likes of Karan Thapar for trying to spread malice and fear, through their writings? Instead, very disappointgly, he obliges the provocative questions of Karan Thapar with his own rhetoric.

When pressed whether he bought this up with the PM and other ministers, and if he was satisfied with the answers – he gave the following answer:

When asked why he chose this moment to do so, Mr. Ansari responded that he has spoken at various times in the last 10 years whenever – “I have in the last ten years spoken out again and again on matters that I think needed to be aired in public.”

Given how much corruption and inefficiency was the key point of public discourse in the years 2011 to 2014, I did a keyword search of “corruption” on his website where his speeches are uploaded. About 6-7 speeches came up with only cursory references to the word corruption and not on the mood prevalent in the country then!

When asked about Kashmir, he gave an elaborate answer blaming the ruling political parties for the scenario today. However, we do not find any view when Kashmir was equally burning back in the year 2010 (when he was our Vice President too)

Why then, does Vice President Hamid Ansari, find the need to give credence to the lies that the Lutyens cabal spreads? It is unfortunate that he was sounding more like a spokesperson of the cabal and hasn’t voiced a more independent opinion. It is equally unfortunate that he has chosen not to harp on any of experiences in improving the functioning of the Rajya Sabha (especially in the last 3 years), and instead laments on how he was helpless in controlling unruly members.

Karan Thapar’s conversation is easily one of the most easiest interview once could imagine to have. Rhetorical questions on “reforms in Rajya Sabha” as proposed by Arun Jaitley; money bills etc have all elicited rhetorical answers that don’t give us any clarity.

Further to this, the vile nature of Karan Thapar’s questions will put any neutral journalist to shame. Sample this one:

KT: Let me come to Rajya Sabha TV. To everyone surprise and delight, it’s a channel that established itself with credibility, with independence, with a certain neutrality and that happened under your charge. Important colleagues of mine, who are senior journalists like Siddharth Varadarajan, M.K. Venu, Govind Ethiraj, Bharat Bhushan, have all been anchors. Now that you’re stepping aside, there is a concern in the media world, that perhaps the quality and character Rajya Sabha TV will change.

Blood boils with anger when one reads such ridiculous assertions. It is independent when rabid anti-Modi journalists are given space to vent their frustration? The elongated question sounds more like an exasperation that another fortress has been breached despite all attempts to stop the breach.

On the whole, it was disappointing to see Vice President Hamid Ansari choosing to step down in this manner. He could have done better.