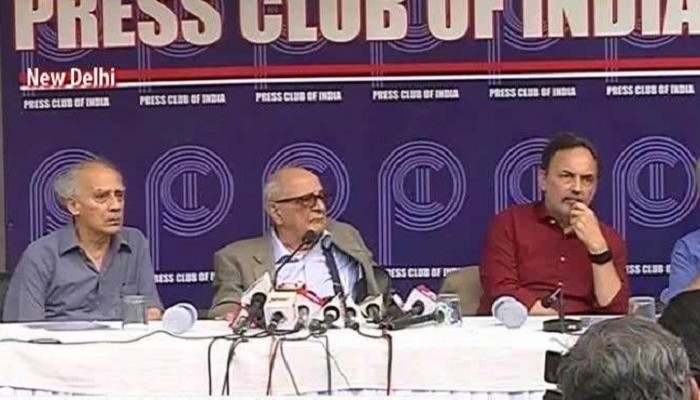 The Hindu published three articles, in their “Left, Right and Centre” section of the Op-Ed. The topic – the ever so predictable – “Is the media under siege?”

Well, the very fact that they can publish such a headline shows they are not under “siege”, but let’s park that argument aside for now.

The first article is by Krishna Prasad, former Editor-in-Chief of ‘Outlook’ magazine, and a member of the Press Council of India. Predictably, he is representing the “left” side of this debate. He begins his article by telling us a conspiracy theory but not giving us any names.

“Late last year, an editor whose employment was ended under the ‘tatkal’ quota met a media owner whose exit had been similarly fast-tracked a few months earlier.

“Who was making the [phone] calls?” the latter asked. When he heard the names of a couple of Union Ministers, the ‘malik’ snarled: “Oh, wasn’t that glib RSS chap in the BJP amongst them?”

The story has remarkable similarities to what happened in the offices of The Hindu, in 2013. Siddarth Varadarajan was sacked as the editor of The Hindu, and Malini Parthasarathy was appointed as the editor. N.Ram gave an interview in which he alleged that a story related to Robert Vadra was held off from being published, for a very long time.

So, if we were to go by the anecdote provided by Krishna Prasad above, the media was definitely “under siege” by the UPA government in 2013. Krishna Prasad was the editor-in-chief of Outlook magazine then, and did not bother to tell us then that “it is not just the media that is under siege, but the very “Idea of India”.”

He goes on with his agenda of scaremongering, and invents a new phrase – “weaponised trolling”. What does this even mean? That I hold a gun to your tweet and blow my computer screen off? Or I hold a knife to your Facebook post and stab my monitor? What kind of pleasure do these editors get by using dramatic phrases that are nowhere close to reality?

Krishna Prasad goes on to make another accusation – “Putting the same man in charge of the Finance and I&B Ministries in 2014, therefore, was a masterstroke. After all, the government is the biggest advertiser.”

Guess what! The “same man” is not in charge of Finance and I&B anymore. Since 2016, it’s a different man. So where goes this theory now? Are these editors simply assuming that the people of this country do not know who their current Finance and I&B ministers are? The insinuation is merely a reflection of the uneasiness they are feeling at their repeated failures.

One statistic the liberal cabal has continued to throw at us, is some ranking called the “World Press Freedom Index”. In Krishna Prasad’s own words – “Little wonder, India now stands at 136 on the World Press Freedom index, down from 133”.

What Krishna Prasad (and the cabal) doesn’t tell you is this - India’s ranking was 105 in 2009 and 140 in 2013 – a staggering drop that never gets highlighted in the media. India’s ranking was 140 in 2013; 133 in 2015 and 136 in 2016. However, I am not sure the parameters through which these rankings are arrived at (because for example the “drop” in the rating in 2016 is attributed to “the rise of Hindu nationalism”) – hence, never bothered about these ratings. But if the cabal insists on following these rankings, then we might as well get the entire picture and not the skewed one!

“The Indian media has often acted more like a lap dog than a watch dog. On Modi's watch, it's tamer than ever.” – this is one of the tweets by Sadanand Dhume in his latest avatar as a troll.

If it has “often” acted like a “lap dog”, why pray didn’t these people raise a voice “often”? Why did they get the courage to speak up only now?

In 2015, at the peak of the debate on “intolerance”, Rahul Gandhi read out a speech in the Lok Sabha. He thundered:

“Dabholkar, Pansare and Kalburgi are shot dead in cold blood by fanatics. The Prime Minster has nothing to say.”

Narendra Dabholkar was a doctor, rationalist and author. He was murdered in Maharashtra in 2013. Rahul Gandhi is right – the Prime Minister of India in 2013 had nothing to say. Neither did Rahul Gandhi want him to say anything. Kalburgi was shot dead in Karnataka – a state that is ruled by Rahul Gandhi’s party. It is one thing for political leadership to remain quiet – the question no one bothered to ask then was why is the “lap dog” silent?

The IT department filed a case against NDTV in 2008, and began to seriously pursue it in 2013. In 2017, NDTV releases a clarification in which they emphatically claim – “Shame on the IT department.” If they could write so in 2017, and not in 2008 or 2013, then during which regime is the media under “siege”?

The Indian main stream media is as free or as “under siege” as it has been for many years – the increased scrutiny it has begun to face, once social media has become active, is pushing these “liberals” into a corner. The resultant outrage is because of being questioned – something they are not really used to!