A R Rahmanâs Harmony- Ode to unsung Musicians of India 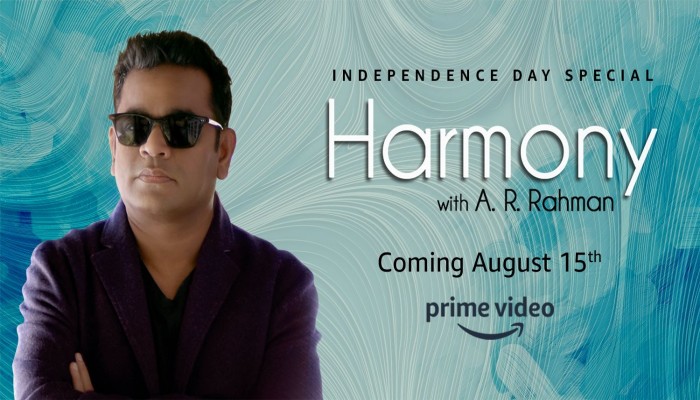 I do not recollect a single interview of A.R.Rahman that talks about music. Now don’t get me wrong – there are zillions of interviews that ask him about Roja, Bombay, Slumdog Millionaire etc. Zillions of interviews that ask him about “inspiration” for his movie songs. And of course, no dearth of commentators that tell us that Rahman’s music is finished, after every movie that is released!

I haven’t learned music either. Like many, I just enjoy listening and trying to appreciate some nuances. In this context, when my brother first alerted me to his new show titled Harmony, I was really hoping it will not turn out to be another of those “interviews” where we don’t get to learn anything new about Rahman. And when we watched the first episode with friends at home, I was literally speechless. Because not only was this was the kind of show I always yearned to watch Rahman in, it also involved Rahman hosting, interviewing and discussing music!

Harmony is a 5-episode series on Amazon Prime. Rahman visits “non-popular” musicians from different parts of our country and interacts with them on their music. He then blends in with his music, to give us all an unforgettable experience. In the final episode, he brings them all onto one stage and does a concert – Harmony!

Why are these episodes and stories unforgettable? Because they give us a great glimpse into the grit and determination of exceptionally talented artists who have struggled against odds to keep alive regional traditional music. Because they make us feel humble in front of the great sacrifices they have made, in pursuance of something so close to their heart.

We first meet Sajith Vijayan, in a stunning shot – playing an ancient musical instrument called Mizhavu alone on a riverbed. We know that the show will be only about music when one of the first questions Rahman asks when introduced to Mizhavu, is where does the reflection of sound come from? And that sets the stage for an engrossing discussion between both Rahman and Sajith, and some superlative performances of Sajith that will take your breath away! As we hear the story of Sajith, we are also introduced to his guru Shri PK Narayanan Nambiar.

The genuine warmth and happiness in Shri Nambiar’s eyes when he welcome Rahman must be seen to be believed. We are then told  how Shri Nambiar bought Mizhavu to the masses. Prior to that, this instrument was only played in temples. Shri Nambiar explains how he faced resistance when he wanted to bring it out. His logic? “If we confine something to one place, it will only get ruined”. So when Rahman compliments him for being very brave to have done that in those times, you can’t help but nod your head along in appreciation of Shri Nambiar’s actions to break the conventional mould.

A similar story, of safeguarding traditional music, plays out in Episode 3 – this time in Manipur. This story is of singer Laurenbam Bedabati Devi! Am sure you will also fall in love with bubbly nature and her voice once you watch the episode! To dedicate her life to the Manipuri traditional folk song - Khunung Eshei, Ms. Bedabati Devi chose to stay as a spinster. As cliché as it may sound, her struggle, her music and her efforts are truly inspiring, and Harmony provided the perfect platform for the world to know about them! By the way, watching Rahman try to imitate Ms.Bedabati’s unique singing style brought a large smile too!

Since we directly jumped to Episode 3 from Episode 1, please do not assume Episode 2 was uneventful! Here, we meet Ustad Mohi Bahauddin, who prays to his rudraveena before beginning to play. I was amazed to know that he has only 6 students, and only accepts students if they can only spend around 8-9 years to learn just one or two ragas! The conversation between Rahman and Ustad Bahauddin veers around the depth to which one can go with just mastering one or two ragas, and has Rahman playing a music bit from Tu Hi Re!

The 4th episode takes us to Sikkim, where we meet Mickma who plays the Panthong (Bamboo flute)! We are even shown how this flute is made, from scratch! This was the first time I saw a flute being made and was fascinated by the whole process. Mickma’s story is similar to the others – he chose to further the art of using the declining traditional Panthong, amidst very trying financial circumstances. Mickma also doubles up as the singer in his small yet lively band! We are treated to a performance by them too!

In all the 4 episodes, A.R.Rahman introduces a new instrument, and plays that instrument along with each of the musician, without overpowering any of their performances. However, the final episode left me a little confusing – perhaps because am not familiar with many nuances of music! I was expecting an encore by all 4 of them together, but I felt that the chorus overpowered the 4 musicians. Or perhaps the expectations after 4 episodes were so high, that it was natural to be disappointed? Either way, this episode doesn’t take away the awesomeness of the first 4 episodes.

In today’s world of fake reality show, we are treated to an actual reality show that brings forth true talent sans any of the melodrama. Harmony brings to us, the untold stories of many brave heroes who have sacrificed much to follow their passion. Harmony brings to us many life lessons that can be learnt. Kudos to Rahman for travelling to them and then making us travel along with them.

PS: Another simple observation for which I believe Harmony stands out - the non-dramatic nature of how the participants react when Rahman is around. For example - Sajith introduces his students to Rahman, and going by their reaction, he had to ask them if they recognized Rahman!