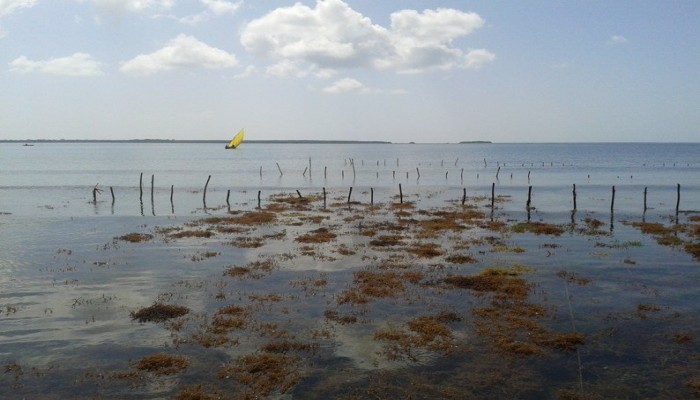 Scope of Seaweed Farming in India

India has a coastal line of around 7,500 km, which can be potential seaweed farming zones. The required manpower for the seaweed farming and processing can be met considerably from the fishermen communities which are vulnerable to climate changes and thereby can enhance their livelihoods. Seaweed farming and its associated preliminary processing can be taken in village or community levels as a strategy of adaptability and resilience in the context of climate change.

The seaweed cultivated in about 0.25 million ha along the Indian coast line can give rise to 30 million-ton of seaweeds. This can lead to about 43 – 300 million-ton CO2 sequestration from the atmosphere depending upon the types of seaweed. Seaweed along the Indian coast is capable of utilizing 3017 t/CO2 per day against its emission of 122 t /CO2 per day, indicating net carbon credit 2895 t /day.

It is estimated by the Aquaculture Foundation of India that seaweed farming could provide direct livelihoods to 0.2 million families in the country, with annual earnings of about Rs. 0.10 million per family. There is considerable scope to involve more numbers of fishermen into seaweed cultivation in India. Some R&D efforts will be needed to scale up the activity across the Indian coast.

Presently, commercial scale seaweed cultivation is being done only in the state of Tamil Nadu, India which is at the southern coast of India. But lots of coastal area are still unexplored so far in term of cultivation activity.

There are organizations which are attempting to raise awareness and help increase seaweed production. An example is Gujarat- based Vivekanand Research & Training Institute, (VRTI) (www.vrti.org), in Kachhh, which has secured industry funding to explore the possibility of seaweed farming suitable for that region.

Mangroves also have an important role in fish breeding.

Advantages of Seaweed Farming for India

India has a coastline of 7500 km, involving 13 States and Union Territories.

First, Seaweed does not require any fresh water, arable land and nutritional inputs. As water scarcity is emerging as an important challenge in the country, this is of particular relevance to the country.

Seaweed production of 500 million tons would consume 135 million tons of carbon, which is 3.2 percent of the carbon added to seawater each year from greenhouse gas emissions.

seaweed is particularly appealing carbon sink due to its rapid growth rate, about 30 to 60 times the rate of land-based plants. This rapid turnover rate also makes it ideal for decentralized production.  Some species of seaweed have high potential for long-term carbon storage.

Second, seaweed can be harvested and used to produce biofuels, whose use is being encouraged in India. A shift to seaweed -based energy could significantly enhance the carbon sequestration potential, and could help reduce the dependency on fossil fuel.

Third, preliminary findings of a research study by university of California indicate that a small amount of seaweed added to cattle food can reduce methane emissions from cattle sector. If this also holds in the Indian conditions, this will have significant impact as in 2018, India’s cattle population is estimated to be 305 million, about 30 percent of the global total.

Fourth, seaweed farming can also produce safe sites for breeding fish populations, as well as reversing ocean acidification. This would help livelihoods and income generation among the coastal communities, many of whose members also engage in traditional farming.

Fifth, seaweeds are highly nutritious and they can be consumed by vegetarians. Therefore, their cultivation could be one of the instruments to help address nutritional deficiencies.

Sixth, seaweeds have many uses in health care products, an area holding promise given India’s rich tradition in traditional medicine systems such as Ayurveda.

Aided by the research efforts of CSIR (Council of Scientific and Industrial Research), and Central Salt and Marine Chemicals Research Institute (CSMCRI), and their collaboration with the industry, India in progressing towards knowledge-intensive farming of seaweeds, instead of relying on seaweed gathering from natural beds.

The India Seaweed Summit held in Mumbai on February 2016, and organized by the Indian Chamber of Commerce had participants from research organizations, including from other Asian countries government officials, and business firms to help promote seaweed farming in India. (https://www.indianchamber.org/wp-content/uploads/2017/12/seawater_Brochure.pdf)

One of the financing sources could be the funds earmarked for the mandatory CSR (Corporate Social Responsibility) activities. In the State of Gujarat, which have good potential for seaweed farming, corporate funding has been obtained to improve livelihoods through such farming.

Another source of funding could be loans from MUDRA (Micro Units Development and Refinance Agency). These are designed to fund micro small, and medium sized businesses.  In 2017-18 financial year, 48.1 million loans were approved, with total disbursement of INR 2464 billion (USD 35 Billion), with average loan size of INR 52,740 (USD 753). (https://www.mudra.org.in/)accessed on September 9, 2018

Seaweed farming would qualify for these loans. It would be helpful if a social enterprise, or a foundation, could help obtain loans, and to provide technical inputs.

The concept of contract farming could be extended to the seaweed farming to make technical and marketing expertise to those engaged in this activity. Contract farming refers to pre-production season agreement between farmer(s) and contracting firms or organizations for the production and supply of agricultural products and transfers the risk of post-harvest market risks from the former to the latter.

The Indian government has drafted the Model Contract Farming Act, 2018 which could make such contract farming easier for small farmers. (http://news.agropages.com/News/NewsDetail---27519.htm) accessed on September 8, 2018. Not only does the Act emphasise protection of farmers’ interests, it also includes services contracts, including pre-production, production and post-production. The Centre has also appealed to states to enact such a law in the interest of farmers.

This Act aims to protect farmers from price risks and encourage food processing companies to invest more in infrastructure and farming technology.

One of the key features of the Act is that it has kept contract farming outside the ambit of the state APMCs (Agricultural Produce Market Committees). This implies that buyers will not pay market fee and commission charges to APMCs to undertake contract farming. This will save at least 5-10 percent of the transition cost and thus benefit buyers as well.

Funding for research on seaweed farming, and application of seaweeds to commercial products, the funding is likely to be shared between the government research institutions and the industry.

As potential for seaweed farming is large in only some of the State mainly Gujarat, Maharashtra, Tamil Nadu, Kerala, Andhra Pradesh and Andaman Nicobar Islands, each of these States would also need to take initiatives to promote this activity. Better coordination between the efforts of all three groups expand the seaweeds industry and its linkages to the various sectors of the economy are essential.

The above suggests a strong case for making seaweeds farming and growing mangroves as an integral Part of India’s Blue Economy. To enhance the impact of seaweed farming and mangrove cultivation for mitigating adverse effects of climate change, it is necessary to extend the seaweed farming area in the different coastal part of India.

There are several financing options to increase the role of seaweed farming and mangrove cultivation.  Finance is not a major constraint, if there is necessary policy focus on this aspect of the Blue economy.

Countries such as Japan. Indonesia, the Philippines, and Vietnam have exhibited high level of proficiency in cultivating seaweeds, and creating newer and wider uses for them including in export industries. Knowledge sharing and learning from them will be of considerable benefit to India.