40 bodies will arrive for postmortem from Guwahati, we had sent them for sacrifice at Kamakhya: Sanjay Raut's threat to rebel MLAs 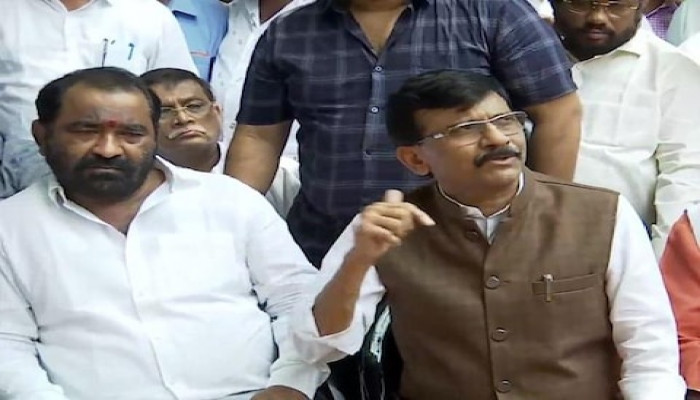 Shiv Sena leader Sanjay Raut on Sunday posted a tweet targeting the rebel MLAs of the party, in which he said that however long they may "hide" in Assam's Guwahati, they will ultimately have to come to "chowpatty", a reference to Mumbai.

"How long will you hide in Guwahati, you will have to come to chowpatty," the Sena MP tweeted in Hindi along with a photo of the state Assembly's Deputy Speaker Narhari Zirwal looking into the distance.

Speaking at the ‘Shiv Sena Melava’ (party gathering) of workers at Sahisar in Mumbai, Raut went up to say, “40 bodies will arrive from Guwahati and they will be directly sent for post-mortem,” in a remark directed at the rebel Sena MLAs.

On Sunday, Sanjay Raut was speaking at a party gathering in Mumbai’s Dahisar and took snide at the Eknath Shinde-led rebel group of MLAs residing in Radisson Blu Hotel in Assam’s Guwahati. Raut said, “When bodies of these forty MLAs will arrive, they will be directly sent for postmortem.” After a brief silence after this comment by Raut, a party worker from the audience said, “No sir, we will directly immerse their ashes.” “Yes, we will send them to Chatt Pooja” Raut replied while the audience burst out in laughter.

Key government establishments, including the Mantralaya (state secretariat), Vidhan Bhavan (legislature complex), Raj Bhavan and the chief minister's official bungalow 'Varsha' are located in the vicinity of the Girgaum beach, which is also known as the Girgaum chowpatty, in south Mumbai.

The majority of Shiv Sena MLAs have shifted their loyalty to minister Eknath Shinde and are currently camping in Guwahati, plunging the Maha Vikas Aghadi (MVA) government led by Chief Minister Uddhav Thackeray, who heads the Sena, into a crisis.

The Maharashtra legislature secretariat had on Saturday issued 'summons' to 16 of the rebel Shiv Sena MLAs, including Shinde, seeking written replies by the evening of June 27 to the complaints seeking their disqualification.

The party's national executive has authorised Uddhav Thackeray to take action against the rebel MLAs.